As I write this in early December 2018, Tom is 21. Gabby is 19. Kieran is 18, and Devin is 15. It’s been an interesting year. When I sat down to decide how to write this year’s e-card, I quickly glanced at a few older ones and had to chuckle about how I continue to write that the current year has been a growing experience for me. I can say without a doubt it’s again true this year, more true than ever. It’s been tough, but I’ve also enjoyed every small step of the way – even the ugly ones… because this is it. It’s the only life we have and we are to experience and take in whatever it brings with it.

For me it was the year of PTSD, running, and blogging more than ever. Here is a quick highlight from each season for our gang –

January – always the opportunity for a new start. It’s a cold and dark time of year. This one kicked off with my brother Mario coming to stay with us for a while, trying his hand at Uber and beginning a new life. Tom moved back home from college and started working locally. Daren & I took a birthday present trip (for Kieran’s 18th) to NYC to see the Opera Tosca. Daren made his first batch of beer. In February I went on a work trip on weekend with Daren to Austin, TX where we had the WORST wine tasting ever. Koji hurt his paw and was on limited duty for a few weeks. In March Daren and I went to Costa Rica with a great group of folks from my yoga studio, and then on another work trip that I accompanied him to down to New Orleans, LA. We spent as many weekends as we could in Branford, and at the end of March brought in the new season of renters, but not before we got back down to the city for Devin’s birthday present from his girlfriend who took him to see an Islander’s Game while we enjoyed some grown up time (eating Ethiopian). 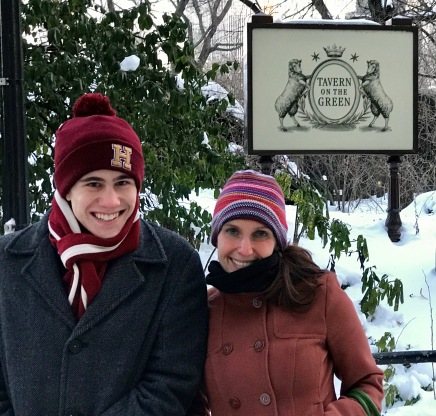 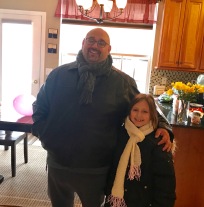 Mario at the start of losing a LOT of weight

On Giving Gifts that Heal this Holiday Season

On the Mysterious Secret of Slowing Down

The weather started warming up (just a little at first). The sun shone for more hours. We took a few trips down to Long Island to visit our families. The outdoor work began at both houses. We did not plant a garden this year (surgery for me), but did create an attractive herb garden off the back porch. Gabby came home from college for the summer and took up a job at Stop & Shop (where she also works at URI) as well as weeding during the day for one of her friend’s from high school’s father’s landscaping company. Mario moved along to work with our cousin Paco who opened a pizza kiosk in New York City, just a block away from Columbus circle. Kieran had his senior prom and graduated from high school. I had carpal tunnel surgery on my left hand. Daren and I took a long weekend and went to York, Maine (my birthday present). Tom bought his first car on his own (used of course) and officially stopped going to college for now. Devin completed his first year at Cheshire High School. I completed a 500-hour yoga teacher certification in June. 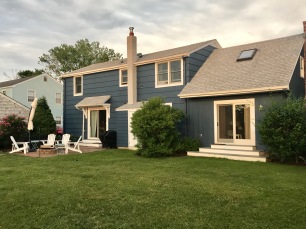 Porch before it got it’s spring update

Daren getting Kieran ready for prom 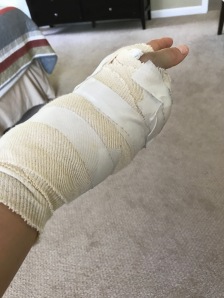 On the Wonder of: What’s wrong with me?

On The Monkey Mind vs Spirit

On Our Human Inchoate Brain

On the Sound of Silence

On a Song for Someone

On the Sun, Moon & Tides

On Being AWOL Through Life

As the summer rolled around the days were officially hot and long. Tom and Gabby worked their summer jobs. We hit up one of the concerts on U2’s latest tour. Daren & I went to Branford for a few weeks but it was cut short by a really bad episode (PTSD related by yours truly) which is how I will pretty much remember this entire year unfortunately. The good part is that I finally took my diagnosis seriously and started pretty intensive treatment. From that point on it is fair to say it’s been my sole focus. Daren, his father, Kieran, and Devin took a 12 day sailing trip along the coast from Mystic to Nantucket and back. My girlfriend Sherrie and I went on a long weekend getaway to an all Women grown up version of camp up in the Berkshires. Around this time I became a bit more serious about running and self-care as well. I spent a lot of time on the trail that is 1.25 miles from our door. I finally got out to NYC to see the pizza kiosk Mario worked in this summer with my friend Lucy & her daughter (before he took up an even better painting job). In August Kieran and Gabby packed up for college. Kieran to Harvard as a freshman and Gabby back to URI as a sophomore. This semester Gabby moved into a beach house with 3 other roomies. I underwent carpal tunnel surgery on my right hand and spent time in recovery blogging and painting with my left hand. Daren and I took a trip to Nantucket after a brief stop in Boston for a work function he had. 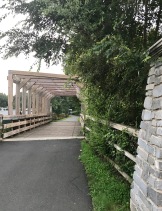 Really starting to hit up all parts of the trail 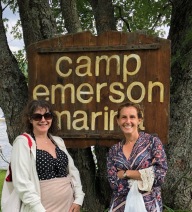 Mario showing my friend Lucy’s daughter how to make pizza 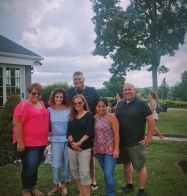 Spending time with some friends 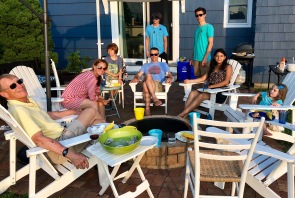 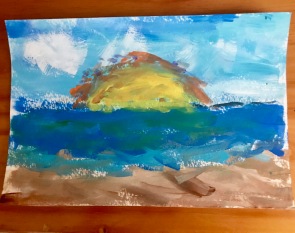 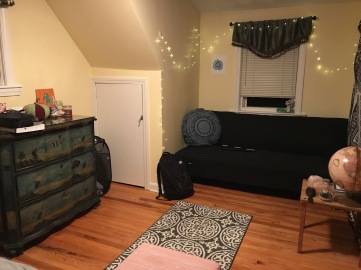 Gabby’s room at her beach house

Me & the hubs, the night I broke down (before the breakdown)

The start of autumn was still incredibly warm for a while. The days however were getting shorter, and the trees more colorful. We did a LOT of weekend traveling this fall. I began by going down to Florida to visit with my aunt Fran who was also hosing my cousin Camille who I hadn’t seen since 1992! It was really special to spend time with them. Daren and I spent our anniversary by going back to Jonathan Edwards where we got married and had a wonderful long weekend in Mystic. We also got out to Cambridge a few times to see Kieran, and down to New York City again to see the Nutcracker and enjoy a truly Nordic meal at Aquavit. Daren had an unexpected trip the ER one lovely Sat eve (kidney stones). The fall baking took place, followed by the fall planting, and then lots of holiday baking! It only got colder and darker as the weeks went by. We had our first snow in mid-November. We’ve hiked a bit, me more so than Daren. I’ve continued to run, topping out at 18 miles for the longest run and shooting for 10Ks for my “short” runs. I’ve also been spending a lot of time by the dark windows meditating and contemplating the beauty of the earth. It’s a beautiful pastime at sunrise and sunset. 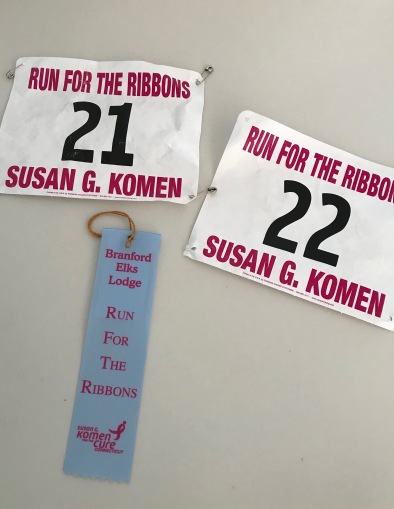 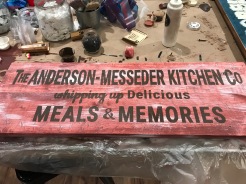 Made at a charity fund raiser for the CHS band 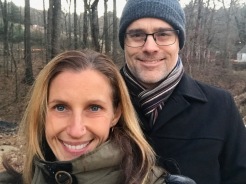 Me & the hubs at Sturbridge

A Hollywood, FL staple. Obama has even been here 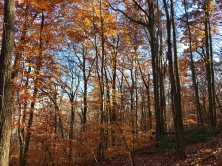 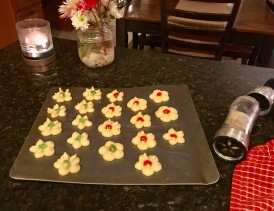 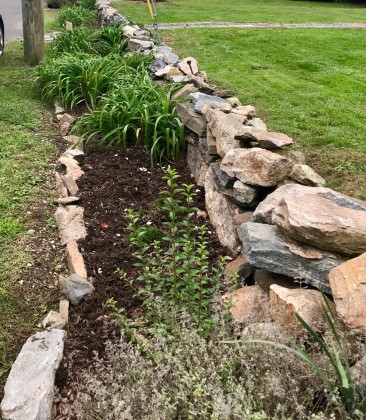 Full moon in the morning 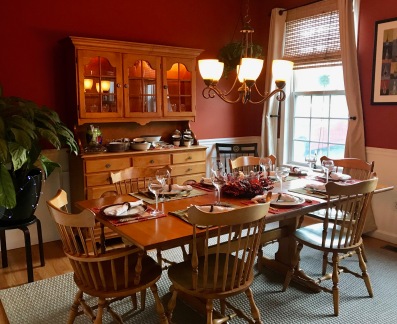 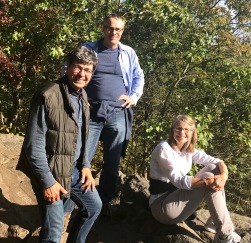 Hiking with some friends

Life in the Slow Lane

On the Fluctuating Gunas (The What???)

On Why I Love Teleworking

On the Harvest and our Minds

On Fear and Suffering

On Navigating with Love

On the Possible Spiritual Aspect of Halloween

How I’m Choosing Who to Vote For

Hygee (Hoo Guh) & How I Plan to Embrace Winter this Year

And speaking of sunsets – … the sun is now setting on 2018. Happy Holiday Season from our family to yours.

I love exploring the link between spirituality, science and philosophy. I enjoy baking, writing, walking, jogging, hiking, cycling, art, knitting and YOGA. I am mostly vegetarian, but not exclusively. I love ethnic foods and making new dishes. I've been working in healthcare administration and the federal government for almost 30 years. Life is a journey and I keep reminding myself to enjoy the ride. Yoga is the platform I've chosen to bring myself back to remembering this. Namaste! ☮