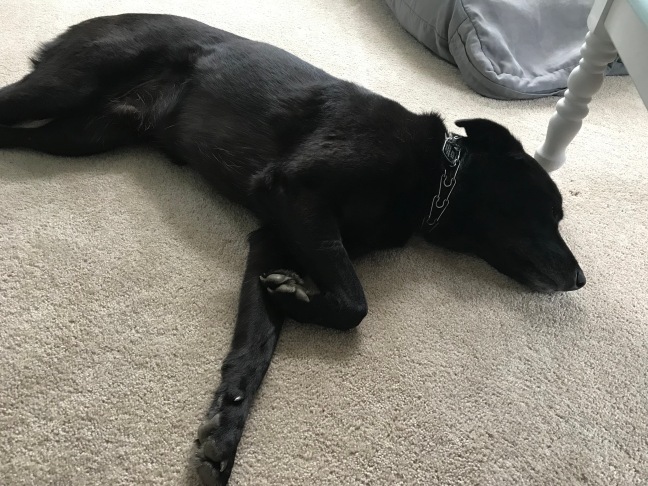 Tonight I’m in Branford, CT. Alone with my dog. A rare Memorial through Labor Day moment when our second home isn’t rented.

I’m noshing on pretzel sticks, olives, edamame, and chocolate from Daren & I’s trip last week to Santa Barbara and to the cutest little chocolate shop I’ve ever seen in the town of Los Olivos, CA… while sipping on an inexpensive (the hubs would cringe at the low cost) glass of Chard.

I was outside earlier. The sun came out for a few minutes when I first arrived. It was warm & comfy in the sun. I met the contractors working on our neighbor’s sea wall. They had some (maybe– fingers crossed!) bad news about our own possibly poorly constructed sea wall. Time will tell, right???

Now I’m inside reading a book I picked up from the library just this afternoon. I’m just on page 34 and almost done with my snacks (aka ‘dinner’) when I came across this line.

I want to be her. Not her friend. I look just past my own feet at Koji and admire him…. But I am the friend. The narrator of this part and Koji are not me. I envy them because I don’t know how to relax.

I’m the chick on the move. I truly can’t stop moving. If I have to I must twitch or shake while not moving. So many things feel wrong with that. But that’s me.

Somewhere in my not so much younger life, I received advice I took to heart from well meaning friends and colleagues on keeping weight off (not due to my weight, just a coincidental state of mind I kept running into). Keep moving, eat light, no eating after 5pm or forget it….

Forget what I thought only to myself?

Self answers: Obesity, heart disease, triple bi-pass surgery or another one of these cases where 45-year-old otherwise healthy individual kicks the bucket out of no-where. Family and friends are astonished.

Other advice – from my father when I was even younger…. Don’t be lazy. People who don’t look around for what there is to do won’t amount to much. Do as much as you cant. Seize the moment.

Seize the moment? Not amount to much? Get fat and be in the newspapers because I kicked it at a healthy 45-years-old… That will be the destiny of the chick reading at the beach. Right? Right?? Right (read- sound of crickets)…

So… I’ll be the one swimming. Meeting the cute guys in the water. Being thrown back in with some other girls as we play chicken or whatever that water game is called. And I’ll be the one in an hour coaxing my reading friend to get up, showered and dressed with me so we can hang with these cute dudes at the restaurant/karaoke bar right there – look you can see it on the boardwalk; at 7pm sharp. Hurry… hurry… hurry.

34 pages into the book. These 2 girls went to grad school together. At this point they just couldn’t be more than 26 years old, though this is my educated wicked cheap chardonnay guess.

So fast-forward to me now at 43 with my sleepy only 5-year old dog. Rocking, twitching, whatever you may call it. My ex used to call it an Elvis shake. I can’t stop moving. So even when I’m sitting/’relaxing’I should be burning calories twitching??? Do I have body issues? NO!  but yeah, who doesn’t?

My brain tells me yes, but my heart/soul say no.

My yoga background says there are two sides to everything. The proverbial ‘They” are Tamasic and I’m Rajistic. The pendulum swings both ways. Somewhere in the middle is Sattva. A place almost none of us achieves because early on in life at some point some how we choose sides. More on this

Sides by skin color/fur color, ethnic background/animal species, gender, income level, housing type, you name it! And sides by if one wants to be on the move or still.

I chose to be on the move. Later in life I realize stillness is the “key”. Meditation. Quiet. Where the magic & wonder is.

But is it? Doesn’t stillness lead to boredom, inertia, obesity & depression. The minute I think of these things I’m on the move again, in case the thought of them may entice me and I’ll turn into what I can’t stand.

BUTTTTTTTTTTTT….. what can’t I stand about it? So I’ll move, miss life and be anxious? Better than being bored, lazy, seeing every slow (yawn) moment, and having my heart not pump out of my chest 24/7/365 due to the anxiety I’m creating. Gulp….

I envy them. So why do I try to avoid being like them??? Is total stillness, meditation and quieting the mind the key to life? I always thought so and oddly strayed from that path to the MOST opposite end I could conjure up before knocking myself out with exhaustion at the end of every day; times 43 years to date. Straying from what I believed rather than moving toward it.

I did always think so until right now when I opted to pick up the laptop and capture these thoughts. No, it’s not the key. The key is in the middle.

Even Buddha says to choose the middle path. Yeah, google it. No one extreme or the other is the answer. In some weird way I feel that applies to everything. Democratic/Republican. Black/White. Hot/Cold. Day/Night. Sun/Moon. Hot/Cold. Yin/Yang.

Thousand of years ago the Tao tried to explain this with a simple symbol of the Yin Yang.

So WHYYYY. WHY, Why, why….. (this is me metaphorically shouting from the rooftops) Why do we have to take sides?

In a completely yet totally unrelated story…. My step-son visited our home just a bit over two weeks ago for just one brief evening and took something without asking from my eastern (albeit sun-rise) facing window sill mock alter I constructed in my son’s (who recently moved outwith a full-time out of town job) old room. It was a statue of Shiva that my husband brought into my life. It had been a fixture in our basement for years until it moved to a new room when my son first moved out into college, then to oldest my step-son’s room when he took it one day from that common room (as he has taken quite a many things that were either ours or his father’s over the years into his room, to his mother’s or in the trash), then to my altar where it stood as my epitome of the Lord of Dance; the Destructor/Creator of Change… and in my mind the one who makes so much change and moves things SOOO fast that they end up culminating into a silent moment. The way the autumn changes, destroys and culminates in winter- which is the only thing that could help spring bloom again. Where the flowers, trees, bushes, fishes, animals – whatever is to come only evolve smarter with age, passing along the wisdom they learned from generation to generation.

And back to the present. Shiva is the most Rajistic of the Hindu Gods in terms of the Gunas. The next Hindu God if this were a circle, would be Brahma who is the creator before leading to Vishnu (the sustainer). All three circle round & round in that order. Create, Sustain, Destroy/Change…. So we can start again.

The Shiva “taking” mentioned above prompted me to purchase a Saraswati staute. Saraswati is a Goddess I briefly learned about at the end of my 300-hour yoga teacher training (for those who don’t know – it’s level of study past the required yoga teacher requisite). Similar to a masters – yet not quite a Ph.D as to those who lead the Master level students.

Saraswati… Just her name kind of touched me the first time I heard the vibration of sound in the air. She’s the Goddess of Wisdom, Knowledge, the Arts. I didn’t remember at the moment I ordered the statue, but she is the “female” Goddess of Brahama, the creator. In my memory she was the consort of Vishnu who sustains what is. Kind of similar to the middle part of life. The summer. The heat. The least of anything I’m attracted to. I’m moved toward super movement, but attracted to rest.

Symbolically Saraswati intrigued me, though the male version of Shiva raptured me. Probably because it’s where I am in the scale of life. In that late stage of change, heading toward rest/rebirth/spring.  I don’t know why I was and may possibly continue  to [until the end of my life] hold onto to this habitual thought pattern. As humans, I know we are drawn to habits and repetition, but ultimately we are meant to pass through the cycle and keep moving.

If ‘keeping moving’ when you need to move to the next change toward rest is what you are holding onto/fighting against, then you are stuck. When you are stuck you are fighting the laws of nature. Similar to attempting to swim against the tide. You can either go with it or let it overtake you. Nature always wins.

That may have been TOO much for some. I perplex myself sometimes and have to stop and think about what I’m thinking or writing about. But yeah yeah yeah… that is just one more sign that I’m at that edge before slowing down, just trying to keep on holding on by moving.

It’s funny I felt drawn to Saraswati. The most Yin of the trio of the dual male/female God-beginning of the cycle. Drawn to the Goddess of Wisdom, Knowledge, and Creativity. Aside from the last 3 years of my life being the most anxiety ridden of my life, they’ve also been the most creative.

Maybe I’ve been on the cusp in these three years toward change. Maybe I was on it long before then; perhaps I was born that way. Whatever the case, the people and experiences in my life shaped my habitual thought patterns.

But that doesn’t mean I need to hold onto it and not accept the transformation so desperately trying to take place within me. It doesn’t mean I should build walls around myself to protect what is old and crumbling.

It’s funny the crumbling physical sea wall just a short while ago was brought to my attention here at the very place I write this from. It’s not a coincidence my silly black lab mix was peacefully laying beside me as I read a line from this book that struck a cord.

There’s a reason why I want to be the girl who is reading at the beach and not the one swimming. I don’t know why I’m fighting it. To be honest, it’s quite exhausting.

Let’s just stop choosing sides and all get along. Perhaps that will quench our inborn desires to swing one way or the other towards the middle where we can all just stop swinging and see the beautiful life we were given without all the surrounding opposite end issues, and enjoy the miracle together. Accepting all that is from every view.