This first day of 2019 I sit in my dining room after a long run with a warm cup of tea in the sunshine, not far from our dog who has also found comfort & post holiday solace in a beam of sun.
Across the room are two potted plants I purchased this past spring. They are geraniums mixed with a few other plantings. They very happily lived on the front porch for the spring, summer, and early fall. As they began to die off when the weather cooled, I just happened to be reading a book where a woman in England talked about having her geranium plant for 13 years. She would bring it indoors each fall and back to the outside each spring. Instead of emptying the containers in the woods behind our home as I normally would have done with these plants, I decided to try my hand at keeping these two lovelies alive through the winter.
This morning when I opened the blinds to the new day and new year, I happened to see a little red bud on one of the plants! While I don’t believe the plant should be blooming, I was excited to see that my efforts are taking effect.

However, this afternoon while sitting in the same room I noticed the rose bush just on the other side of the window. It’s dead/hibernating in every way. There is also a little red bud on it that stopped growing mid-bloom during the first frost, and will never open to what would have been its full potential as a rose flower. 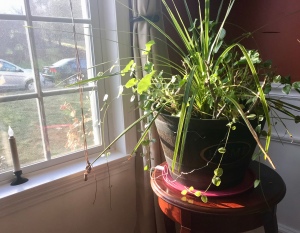 The difference is the warmth, care and attention I’m giving the geraniums. They get monthly plant food. They are shielded from the cold, just on the other side of the window. They have a fighting chance at survival. How is this not different from the way we treat others in the world?
Folks on the other side of the tracks. The homeless on the other side of the window from our homes, jobs and businesses we frequent. The children that do not have the same opportunities to thrive to their fullest potential as perhaps many of their other classmates due to their home environment and lack of warmth/nurturing.
Last Thursday I drove down to Branford during rush hour. There was an accident on I-95 North at the ramp, and the signs on the highway suggested finding an alternate route. I followed my GPS and a few turns later I didn’t recognize where I was or fathom how a few turns away things were SO different. Suddenly there were really really busted up houses, apartments and abandoned buildings. Check cashing stores, pawn shops, scary looking package stores, one too many convenience merchants advertising the sins of the world. Folks were walking around hunched over with old clothes and hardly any outerwear. Drunken people around my age just wandering the streets alone or with another drunk counterpart, barely sober or alive enough to pay attention to oncoming traffic.
Just on the other side of town… As the rose bush is just on the other side of the window.
If the rose bush was also potted and brought it, the flowers would continue to thrive as well through the winter as they continue to bloom non-stop in the warmer months.
I am fully aware that I’m not comparing apples to apples. The rose bush outside alone is a perennial and will resume its duties in the spring. The geranium would not be alive next year if it were left out all winter.
But people are not flowers. We are born the same, not with such different gene sets like these two flowering plants I speak of. However our circumstances decide if we thrive or not. It’s the warmth and caring of our environment, town, parents, and community which determine if we bloom to our fullest potential or flounder all of our lives just trying to stay alive.
It’s not fair. Just on the other side of the window the ones with are safe and warm have a duty to do something; simply because they have the power, energy, and stamina to do so. Because they can, I humbly believe that they should.