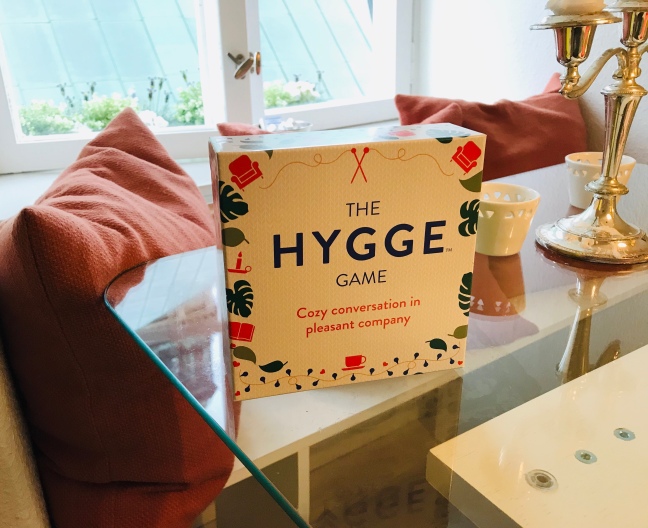 I have this recurring dream, probably for at least 2-3 years where I’m in need of a bathroom and the only ones available are in public restrooms with lots of toilets and no dividers. I will use it anyway. Often without fear, embarrassment or anything to the like; as everyone else in there seems comfortable doing their thing and that normalizes it enough for me. A few days ago I actually went into a restroom where I saw this to be a reality and literally pinched myself in wonder of whether or not I was dreaming. 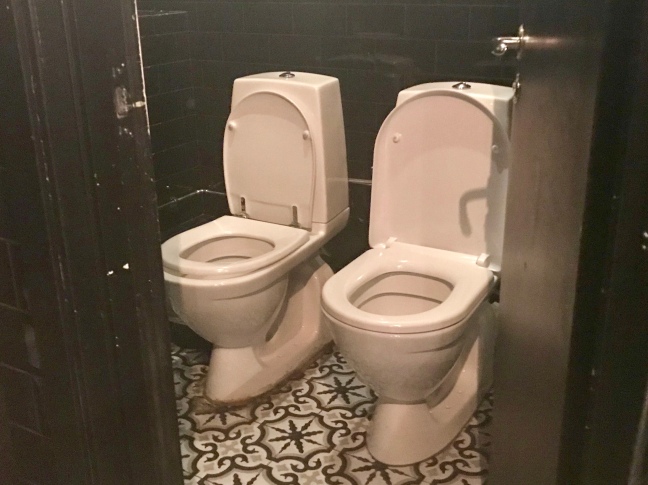 I couldn’t help but then Google what this dream means, and I learned that it signifies (not surprisingly) a lack of privacy in one’s life.

For many years I did feel a lack of privacy – mostly in the way of being myself since I moved in with my husband and step children. That is coming up on almost 10 years ago. I often felt like I was on a stage and that every move of mine was being watched and judged by the critics in the audience. Likely because it was.

Something I would say with no malintent like brushing your teeth after eating before school makes more sense than before eating, or having a phone conversation with my ex husband about our children’s grades or something would come back to me or my husband a few days later in some form of judgement or ridicule.

The food I made or some ingredient that seemed foreign was meant to purposely exclude someone who didn’t like it. The norms or rules I lived by before (that most parents have in place) were now viewed as capricious regulations I set forth because I wanted to control the step kids.

I let the kids watch family shows for an hour after homework at night, I had bedtimes, I tried to limit screen and video game time, I made a variety of different dinners and insisted the kids try new things in order to eat dessert (with my own biological children long before meeting my husband) – and all of it was picked apart, criticized, or judged. Nothing I did was right. It was exhausting for me and my husband to constantly have to talk about or defend what seemed to me like normal behavior.

Going back home at the end of a long day and being in a new situation is tough enough. But then worrying about every ingredient I used, every conversation I had (even behind closed doors and on the phone), every song I listened to, everything I read, how my yoga was weird, EVERY move I took made it positively exhausting. I felt like I was unable to ever figuratively let my hair down and chill out in my own home. There was no where to go. No where to run to in order to just BE.

Then I really started to stress. I was diagnosed with anxiety disorder. Not too long after, the PTSD I had lived with my whole life came to life and went out of control. For the past 3 years or so I’ve been metaphorically purging my past. A lot of yoga, time off, and time in an outpatient mental facility will do that to you. I started blogging around 3-4 years ago and going very public with my struggles. No privacy – absolutely. Was I ok with that? Not really, but it was something I could live with.

But feeling like I can’t be myself, allow my natural feelings to flow out of me however they may, now that I truly had no control of the emotions I had locked up years ago and was working through in therapy… THAT was another story.

I like self discovery. I can’t say a lot of what I’ve gone through was pleasant, but I wouldn’t change it if a magic wand was handed to me and I was able to go back in time and do things another way.

Life is not supposed to always be pleasant. I believe we are here to learn and examine when we are in discomfort. Making connections between my feelings, my dreams, my values and why they all have a positive or negative connotation makes it all part of life’s beautiful and super messy journey. How boring it would be otherwise!

As I’m growing older I am not just going through the days of my life, but living the days and experiences while examining my role in it, however small. I’m looking to the sages and teachers before me who tried to instill the wisdom they’ve learned. They know what makes life worth living. They knew and tried to tell us that you have to take the good and the bad, and not resisting any of it makes it easier and, dare I say, more colorful! We get so many conflicting messages from society that it can be difficult to know what the best way to do anything is. One lesson I’ve learned but continue to struggle with is self care.

In a separate but very related story a few days ago my husband and I bought a Hygee card game. We sat down with a glass of wine and started to ask one another thought provoking questions. Some questions seemed silly at first and we started to skip some. But a few cards in we realized even the silly ones can be deep and there was no need to rush through them. The richness was in slowing down and really exploring why you would answer in a certain way.

A few hours later we pulled out the cards with my youngest step son. One of the questions asked was the type of person we most admire. The type… hmmmmm.

I had to think about that and spoke my mind’s reaction aloud to Devin and Daren. My immediate reaction was the Copernicus types. People before me who ultimately knew a truth and were not afraid to go against the grain of the masses to pass it along. My second reaction was the Mother Theresa types. People who give without any type of return expectations. Then strangely enough I said- “actually I don’t admire Mother Theresa.”

I thought about why. Now – don’t get me wrong, I cannot say I know very much about her and how she spent her days, but the impression I’ve received through the years is that she gave relentlessly. That’s wonderful right? But did she rest? Did she take time for herself? Get a massage, a mani/pedi, meditate and clear her mind from outside influences, eat food that would nourish he body and soul? I don’t know. Maybe. But my impression is no.

So my third answer was the Dali Lamas over the years. They do mediate and practice self care. They preach what we all know to be the truth inside. I can’t really argue with their messages. Maybe others can, I don’t know.

I grew up in a Catholic school and in the Catholic Church. It was ingrained into me to give ceaselessly. To be a Mother Theresa type. Now that I’m older and hopefully wiser, I’m not just reading the words of the sages and of the Bible quickly without thinking and making a checklist of ho hum, yeah got it. Like the Hygee cards stopping to think about what the words mean and how I may want to interpret them and live my own life.

Most of us have heard the Bible quote “To love thy neighbor as you love yourself”, but what does that mean? Do unto others… but what if you don’t love yourself? What if you don’t practice self care? You can do what I thought of as a “Christian” thing and love them and give them more than you give yourself, but that is exhausting! And if you loved yourself and made self care a priority- wouldn’t the world be a better place if then we took THAT person, attitude and energy to our neighbors. Without the self care the model is tiring and teaches the neighbor only to take. If we showed them what we do – like rest and give, they in turn can do the same. Otherwise shortly down this chain of relentless giving, we will experience burnout.

I didn’t go into this much detail with my husband and step son the other night. But it’s a combination of the Dali Lama and Copernicus types that I most admire and a small part Mother Theresa. A balance of love, self care, giving and teaching from the heart.

The day we played these cards was the same day I saw this public toilet. Granted- these two toilet bowls were in one stall with a door, likely for a mother and child. But it brought my awareness to my recurring dream and my curiosity was piqued just enough to google it.

Yes, I don’t have too much privacy- BUT I’m also not practicing the self care I know I so desperately need. I admire these people, but I’m too exhausted to do any more to be like them. Perhaps for all those years when my children and step children were younger if I did practice self care (mediated on what I’m mediating on now) I’d have realized earlier on that I shouldn’t be affected by what other people think, and should feel good about doing what I really knew to be the right things rather than worrying and living in constant fear of judgement.

If I practiced self care I may have been an example to teach them all the same. To go to a private space and just take care of yourself in any way that feels rejuvenating and fulfilling to you. To love thy neighbor as you love yourself means you have to love yourself first and foremost. Or the model just doesn’t work.

My wood pile on the porch. This was taken only yesterday after moving a half cord of wood myself and then making a large tarp to keep it all warm & dry. I put kindling in flower pots. Today the scene is full of snow! 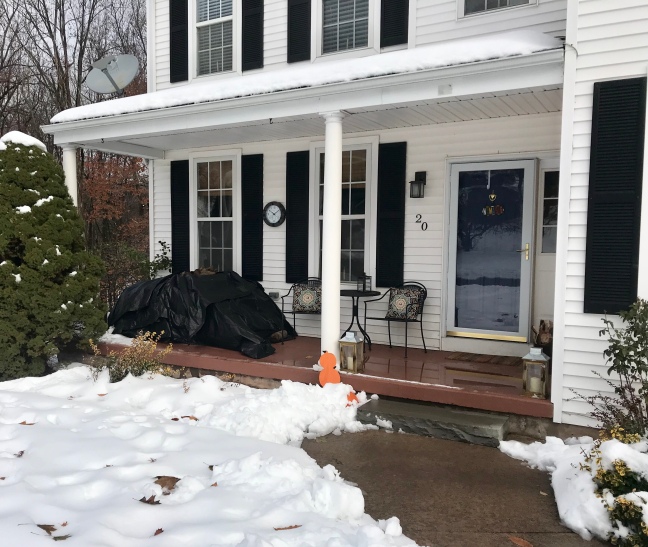